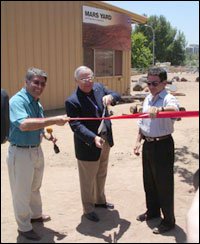 A new MarsYard to test the mobility and autonomy of future Mars rovers was unveiled at the Jet Propulsion Laboratory on June 19, 2007. This new facility is approximately 21,000 square feet, six times larger than the previous MarsYard, and includes a new building that will be used to house rover operations.

MSL's prototype rover, called Scarecrow, was unveiled in this ribbon-cutting ceremony. Measuring over 2 meters in length and width, it is capable of carrying large science payloads and traversing over much rougher terrain than the Mars Exploration Rovers (MER).

Two new research rovers, Athena and Pluto, were also shown in operation during the event. They were joined by a third research rover and older sibling, FIDO. All are smaller than Scarecrow and similar in size to MER.