Skip Navigation
Home > What We Do > Flight Projects

While much of the work done in robotics at JPL is research, the ultimate value of the technology is in its ability to enable and enhance our exploration of the solar system. Four flight projects are of special significance in the level of robotic technologies captured by them, and these contributions are described at the links below. 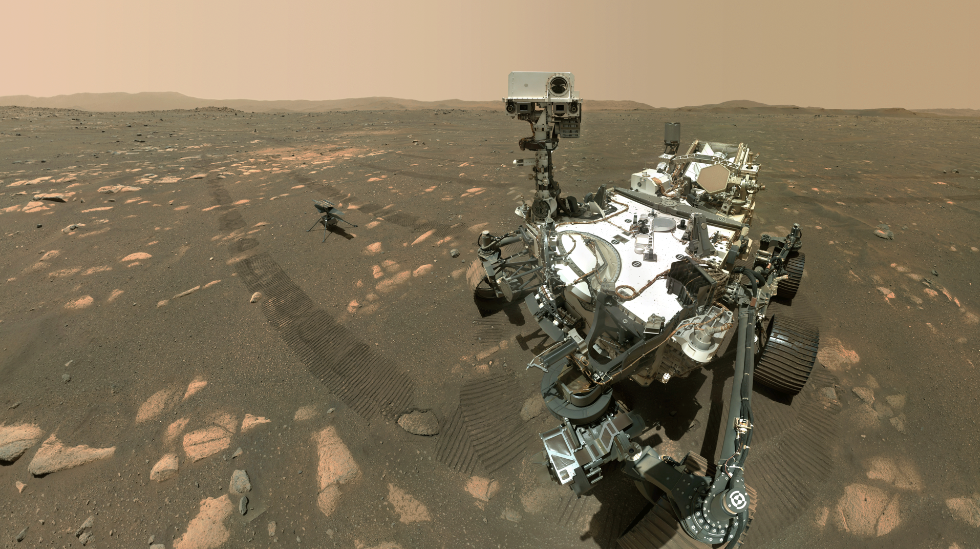 The Mars 2020 Perseverance rover landed on Mars February 18th 2021. It is the next step in the exploration of Mars following the highly successful Curiosity rover which landed on Mars in 2011. The rover carries more sophisticated, new and upgraded hardware, instruments, and technology to conduct geological assessments of the rover’s landing site, determine the potential habitability of the environment, and directly search for signs of ancient Martian life.

The Perseverance rover carried with it a technology demonstration, the Ingenuity helicopter, which demonstrated the first successful controlled powered flight on another planet.

The rover has a drill to collect core samples of Martian rock and soil, then store them in sealed tubes for pickup by a future mission that would ferry them back to Earth for detailed analysis. Perseverance will also test technologies to help pave the way for future human exploration of Mars. There are several ways that the mission helps pave the way for future human expeditions to Mars and demonstrates technologies that may be used in those endeavors. These include testing a method for producing oxygen from the Martian atmosphere, identifying other resources (such as subsurface water), improving landing techniques, and characterizing weather, dust, and other potential environmental conditions that could affect future astronauts living and working on Mars.

JPL Robotics engineers are contributing to this project in a number of areas, similar to other Mars Rover Projects (Pathfinder, MER Spirit and Opportunity, MSL Curiosity). Specific areas with significant involvement are linked below. 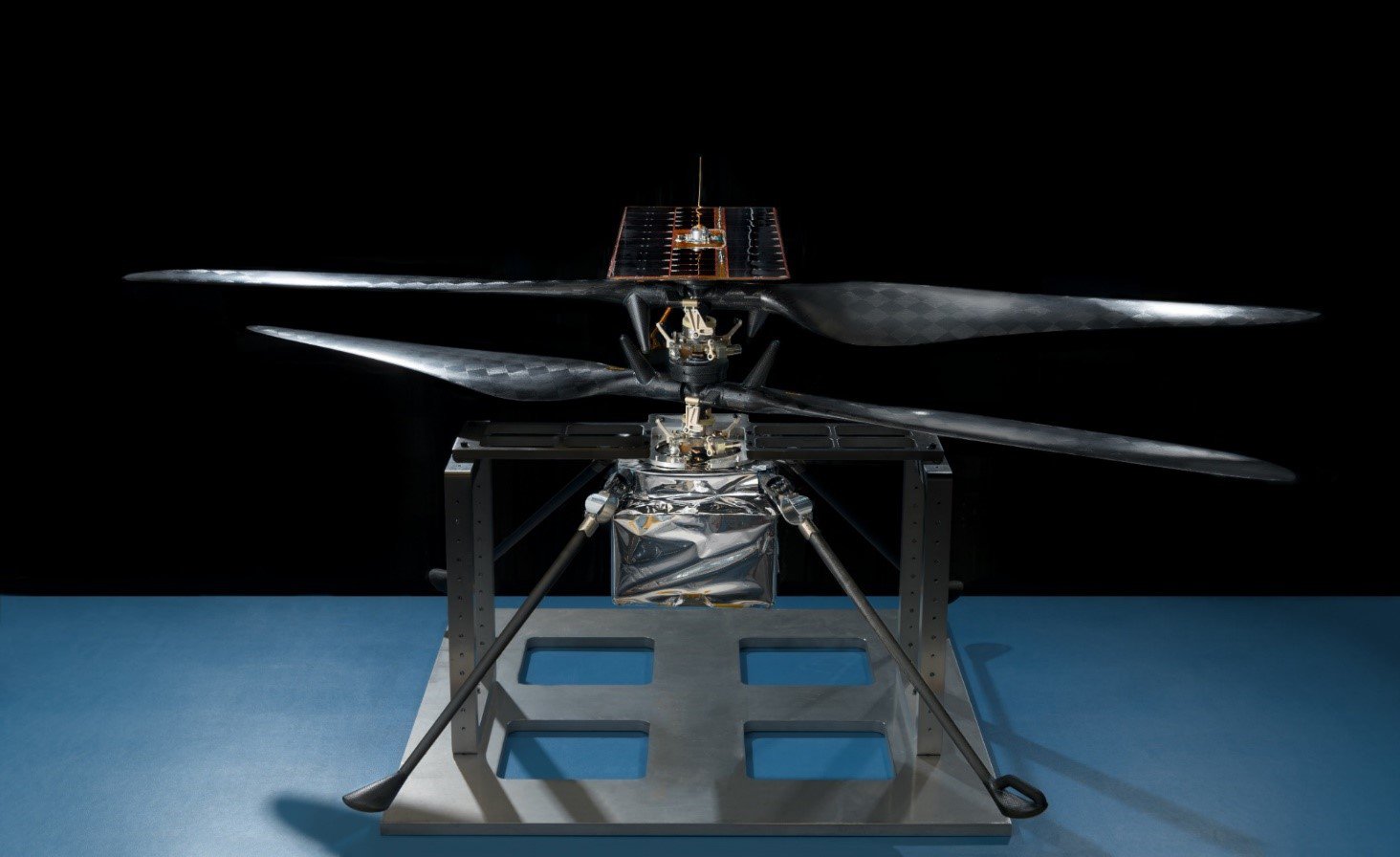 Flight Model image of Ingenuity before delivery to Kennedy Space Center for Launch.

Ingenuity Mars Helicopter is a Technology Demonstration part of M2020 Perseverance, with the core objective of proving that powered flight is possible in the cold and this atmosphere of Mars. Ingenuity’s mission was a success, with its first of many sorties on 4/19/2021, Sol 58, at 3:34 a.m. EDT / 12:34 a.m. PDT / 12:33 Local Mean Solar Time (Mars time). 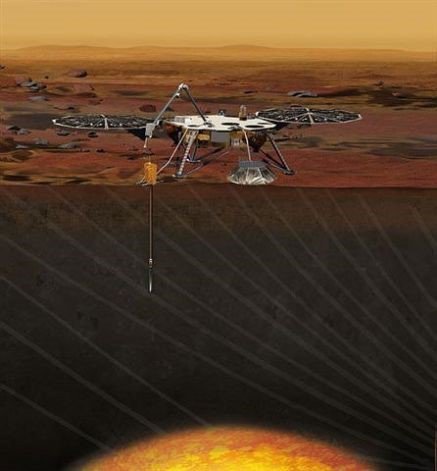 InSight is NASA’s first successful precision robotics instrument placement and release on another astronomical body since Apollo. This operations breakthrough enabled NASA’s InSight lander to detect the first known ‘marsquake’, a faint trembling of Mars’s surface on 6th April 2019, 128 Martian days after landing on Mars on the 26th of November 2018.

For more details on all aspects of the InSight Lander mission, visit the InSight Project website. 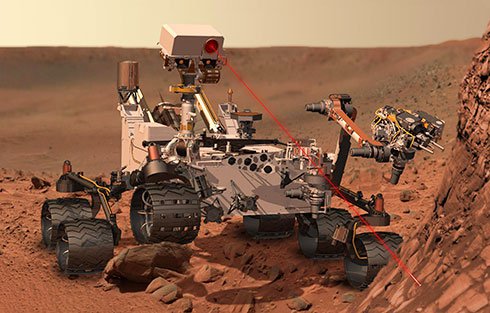 The Curiosity Rover is part of the Mars Science Laboratory (MSL) mission, NASA’s third generation rover for exploring the red planet. At the time it landed in 2012 it carried the biggest and most advanced suite of instruments for scientific studies ever sent to the Martian surface, MSL employed a new entry, descent, and landing (EDL) system. The spacecraft descended on a parachute and then, during the final seconds prior to landing, lowered the upright rover on a tether to the surface.

After landing, Curiosity has relied on a six-wheel rocker-bogie mobility system, which is able to roll over obstacles up to 75 centimeters high and travel up to 90 meters per hour. Additionally, it has a mast with pointable remote-sensing science instruments, and an arm capable of placing contact science instruments and acquiring regolith samples for on-board analysis. The rover’s onboard laboratory was designed to study rocks and soils of the local geology to assess what the Martian environment was like in the past. Currently the rover continues its exploration of Gale crater and Mount Sharp. Below are more detailed descriptions of specific JPL Robotics contributions to this ongoing mission.

To learn more about the Mars Science Laboratory mission, visit the MSL page. 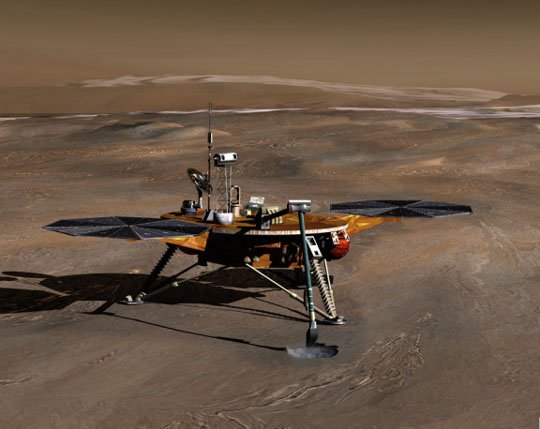 After a flawless landing in the north-polar region of Mars on 25 May 2008, National Aeronautics and Space Administration (NASA)’s Phoenix Mars Lander RA started an unprecedented surface and subsurface exploration of its landing site, a unique geologic setting for landed missions on Mars (Figure 1). The Phoenix Mars Lander mission is part of NASA’s Mars Exploration Program, a long-term effort of robotic exploration of the red planet to conduct field geology and atmospheric characterization. NASA’s Phoenix Mars Lander mission is the first under the NASA Mars Scout Program. The primary objectives of Phoenix mission was to 1) study the history of water in the Martian arctic and 2) search for evidence of a habitable zone and assess the biological potential of the ice–soil boundary. The RA operations team played a critical role in enabling scientists to characterize a wide range of surface and subsurface soil at the landing site in a timely manner. This enabled the hunt for geological clues that revealed that the soil is much more hospitable than many scientists had assumed.

The RA operations team developed and implemented several complex command sequences that used the icy soil acquisition device (ISAD) on the RA to acquire samples of Martian dry and icy soil and delivered the samples to the thermal and evolved gas analyzer (TEGA) [1] and the microscopy, electrochemistry, and conductivity analyzer (MECA) [2] on the lander deck during an extremely constrained tactical timeline.

For more details on all aspects of the Phoenix Lander mission, visit the Phoenix Project website.

Work elements of this project JPL Robotics is leading or contributing to in a major way include: 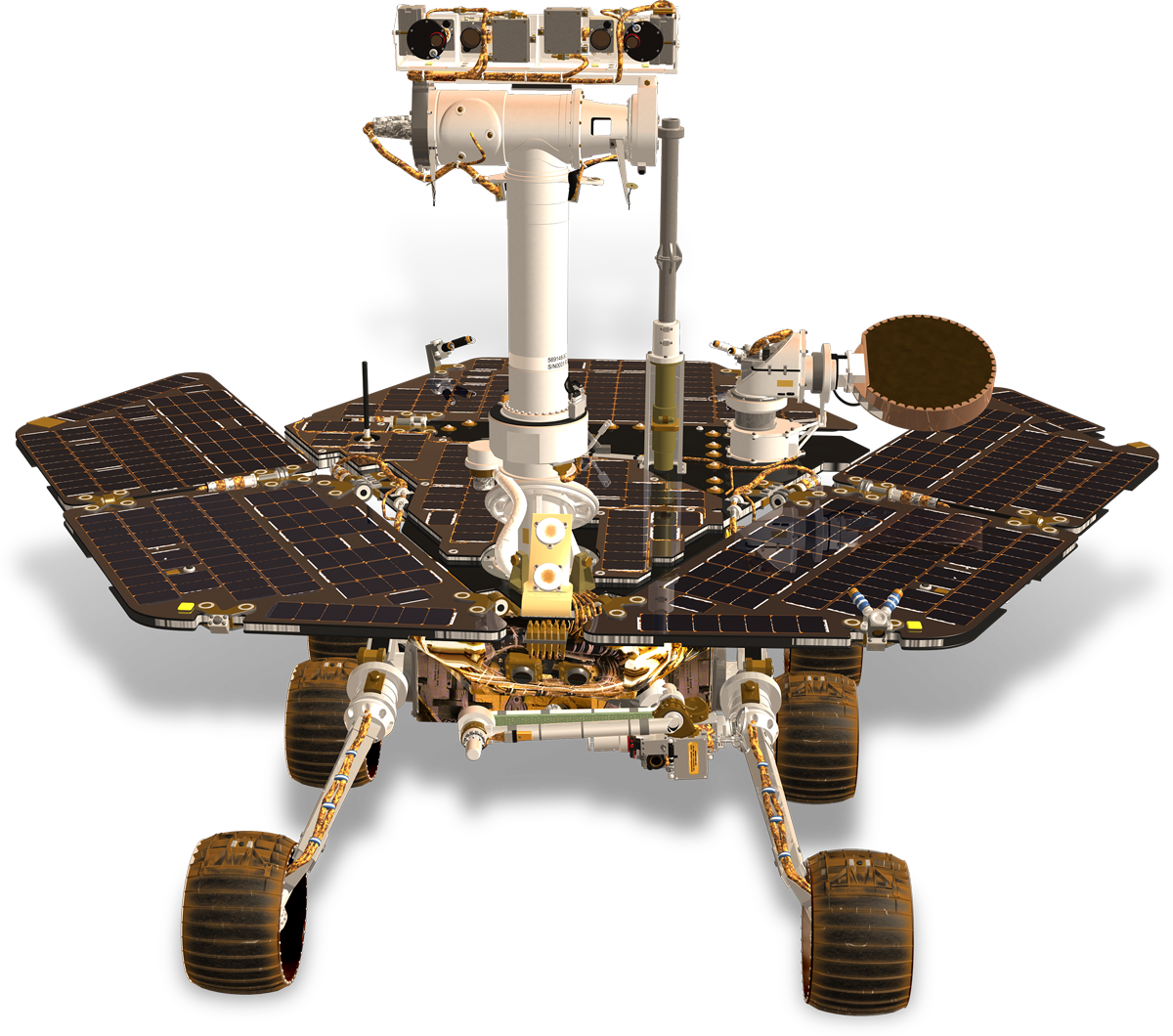 The Mars Exploration Rovers Spirit and Opportunity landed on Mars in 2004. The rovers had far greater capability than the 1997 Mars Pathfinder rover. The rovers lasted far longer than their planned mission of 90 Martian solar days. Spirit until 2010 and Opportunity until 2018. Opportunity’s odometry is 28.06miles (45.16 km). The Mobility and Robotic Systems section had a significant role in the Mars Exploration Rovers (MER) project. Areas of contribution include landing, rover driving, instrument placement with the rover's arm, and ground control. 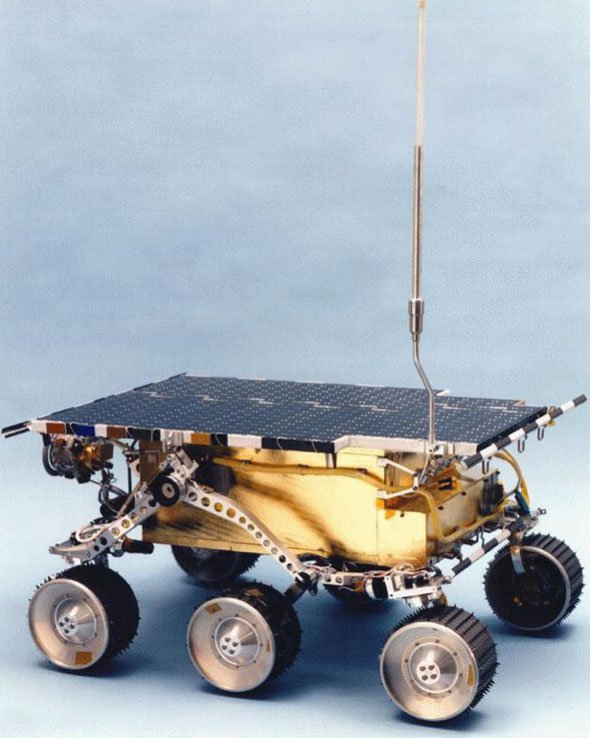 Fig. 1: The Sojourner rover at the end of its assembly and before integration to the main Pathfinder spacecraft.

In late 1996, the Mars Pathfinder spacecraft was launched from Earth. Attached to one of the lander petals and folded inside the tetrahedral landing configuration, the Sojourner Rover was a flight-experiment addition to the primary lander mission. On 4 July 1997, the Pathfinder spacecraft bounced to a stop on Mars. The spacecraft’s innovative Entry, Descent, and Landing system using heatshield, parachute, rockets, and airbags enabled a safe landing at Ares Vallis on the Mars surface.

The Sojourner rover drove off a ramp from the lander and onto the surface of the red planet the next day (sol), beginning a new era of Mars exploration by making in situ observations from an instrumented vehicle. The lander provided two critical functions for the rover's operations: It acted as a communications link from the rover to operators on Earth, and it imaged Sojourner and the surrounding terrain for the operators.

The mission ended when the lander's power system failed, eliminating it as a communication relay and stopping all interactions with the rover.

The Sojourner rover was developed around technologies developed in the years prior to the mission. A ‘rocker-bogie’ suspension system supported the main chassis distributing vehicle mass load across the six wheels. The chassis, containing the printed circuit board electronics and batteries, was thermally insulated with ultra-light aerogel. The rover carried the Alpha Proton X-Ray Spectrometer (APXS) science instrument, attached to an extendable deployment mechanism. A Material Adherence Experiment from NASA’s Glenn Research Center was also carried aboard the rover. Eleven brushed motors controlled the wheels (6), corner wheel steering (4), and instrument deployment. The rover was interconnected with the first ‘flex cable’ wiring harnesses to save mass and reduce thermal leakage from the chassis.

Sojourner was primarily solar powered, but had primary batteries which operated over the first three weeks of the mission and augmented the solar power. The rover communicated through a UHF link to the lander and had a range of 100 meters. The rover was 65 centimeters long, 48 centimeters wide, and was 30 centimeters tall, and had a mass of 10.5 Kilograms. Deployable ramps were developed for both sides of the petal allowing the selection of the best egress option for rove deployment to the surface.

The Sample Retrieval Lander (SRL) is part of the Mars Sample Return Campaign whose goal is to return Mars surface core samples back to Earth by the early 2030s. Mars 2020 was the first in the series of missions and is currently collecting and caching core samples on Mars. SRL is the second in the series whose purpose is to retrieve the samples collected by the M2020 Perseverance rover, package them and launch them in to Mars orbit. The third mission in the series is the Earth Return Orbiter (ERO) whose job is to capture and contain the samples in Mars orbit and effectively launch them back to Earth.

The SRL mission is composed of two landers. The first transports the Sample Fetch Rover (SFR) to surface where it will retrieve sample tubes deposited in various depots by the Perseverance rover. The second lander contains the Sample Transfer System (STS) and the MAV (Mars Assent Vehicle). STS is responsible for retrieving tubes from either SFR or Perseverance, placing a curated set of them in the MAV, and preparing the MAV for launch by closing out one or more covers. 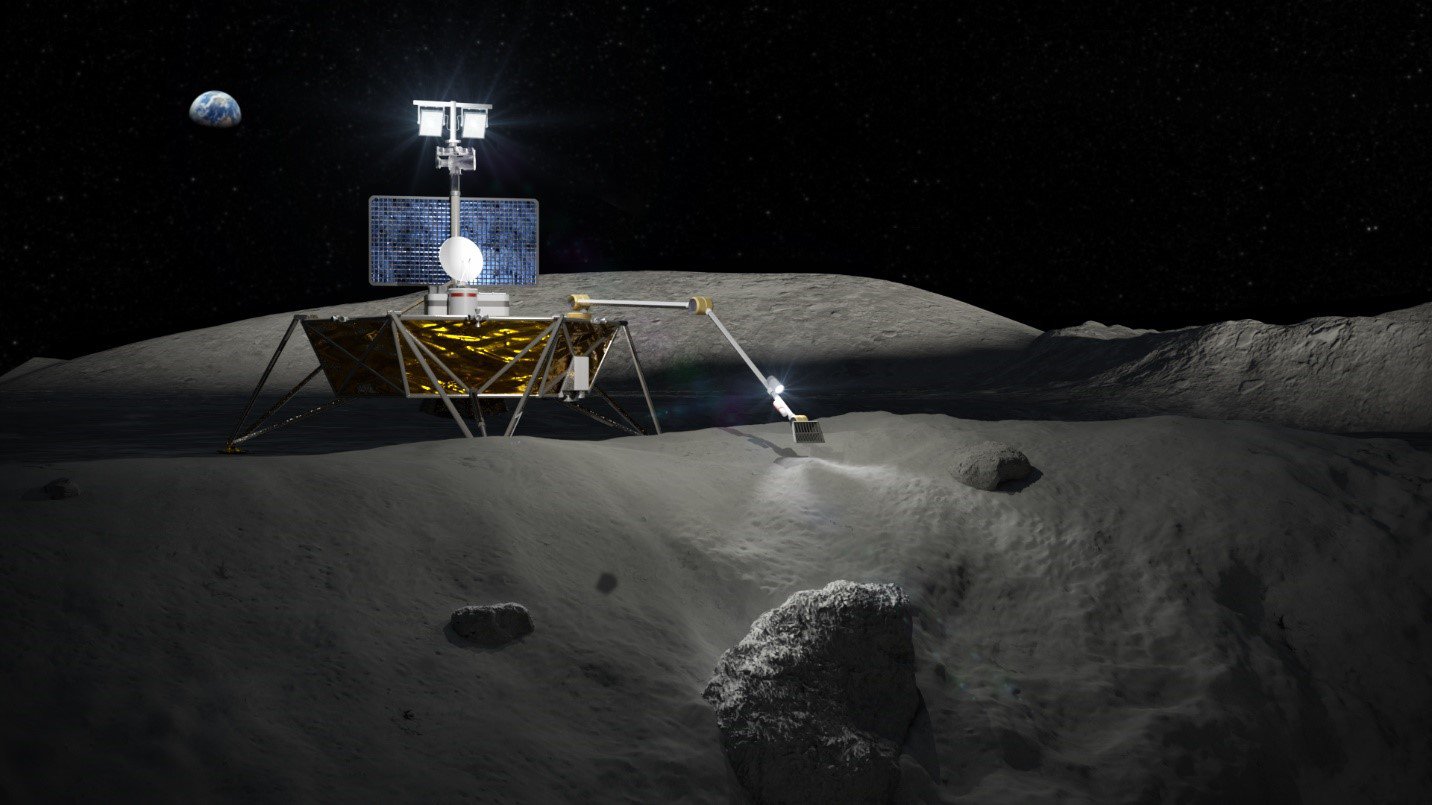 The Cold Operable Lunar Deployable Arm (COLDArm) payload, co-developed by JPL and Motiv Space Systems, will significantly improve the utility for lunar landers by providing manipulation capabilities in cryogenic temperatures, including during the lunar night.

COLDArm is under development for a Lunar Technology Demonstration Mission under the Commercial Lunar Payload Services (CLPS) program. The COLDArm payload will provide a practical way for a variety of future CLPS payload instruments to reach the surface, collect samples, deploy other instruments and provide critical data to the lander while demonstrating technologies to enable missions to future lunar and Ocean Worlds extreme environments. 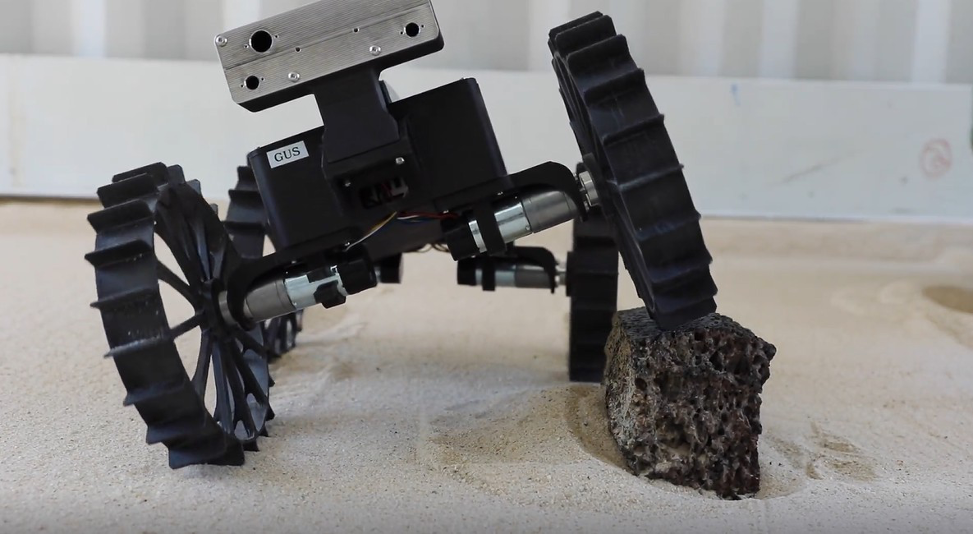 To demonstrate the CADRE technology, NASA/JPL is developing multiple small rovers, capable of surviving the daytime Lunar environment and carrying a micro-payload. The systems is designed so that agents (Rovers and a Basestation) share data among the team and make cooperative decisions about the execution of tasks in the workspace. The rovers will autonomously travel in formation and cooperatively explore the local Lunar surface, generate a digital elevation map and perform a distributed measurement with the micro-payload.

CADRE is funded out of the Space Technology Mission Directorate of NASA, under the Game Changing Development program and manifested as a payload on CP11, a Commercial Lunar Payload Services (CLPS) mission, targeting a late 2023 launch, landing in the equatorial region of the Moon, near Reiner Gamma. Although CADRE is a technology demonstration, the Reiner Gamma region holds particular scientific interest due to the presence of magnetic anomalies that produces visual swirls on the lunar surface.