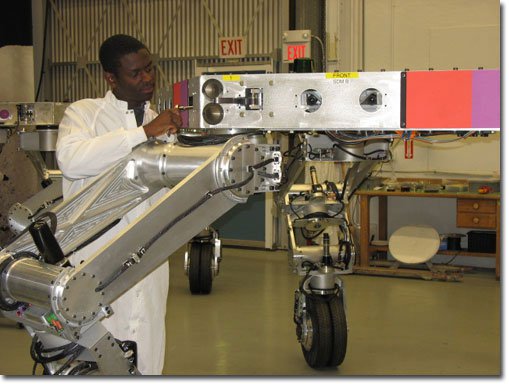 Norman Aisen (Ahmad) has a really cool job working on a new lunar rover project. Currently he's working in the Robotics Hardware Group. He graduated from NASA's Minority University Research and Education Program or (MUREP) and received a full scholarship to attend Tennessee State through the NASA Scholars managed by the National Action Council for Minorities in Engineering (NACME) to study mechanical engineering.

Here's a conversation with Norman:

When did you start working at JPL?

"I spent three summers working at JPL during summer internships through the Minority Initiatives Internship program. The first summer I worked on a proposal for an ice bore hole probe for applications on Europa. The second summer I worked on a Mars Exploration Rover test vehicle. That was a lot of fun! And the third summer I worked with Senior Engineer Dr. Eddie Tunstel to design a sub-surface drilling vehicle for martian exploration."


What did you learn the most from working at JPL?


"I learned how to work effectively in groups and how to become a productive engineer. I also gained lots of practical experience in the field of engineering and got a chance to finally use some of the principle engineering concepts that I learned in college, which allowed me to see how valuable a college education can be."


Did you have a mentor while working at JPL?


"My mentor was Dr. Tunstel for all 3 summers. I learned a lot from him because he offered advice as an African-American engineer. He gave me freedom but also offered guidance. He would allow me to use my creativity to complete a task so he helped me develop my design skills.

Now my mentors are Matt Heverly and Jaret Matthews. They both give me substantial guidance in engineering design, and also help me to assimilate into the JPL world of engineering. With their assistance, I am learning how to work in a professional environment... that's something you can't always learn in college."


What advice can you offer to engineering students?


Excellence is a matter habit... so the things you do the most are the things you'll do the best. I also learned that you should never give up: The only failure is in no longer trying. Also find some type of skill or trade that you can take over to a workplace. Find a skill that would benefit you in the working environment in addition to doing your schoolwork and obtaining your degree.


Did you want to be an engineer when you were growing up?


"When I was younger I didn't really know what an engineer was, but I knew that I liked to repair and fix stuff like cars, bicycles, and radios. Cartoons like the Transformers and Voltron really helped me see how creativity could bring about an innovative design."


What was your favorite subject?


"Science was my favorite subject. I think science deals with things as a whole, unlike math that's compartmentalized. Science includes material science, biology and chemistry... science allows you to see the bigger picture. Math was ok. I could do it and was good at it but I liked science better."


Where did you grow up?


"I grew up in Atlanta with my 2 brothers and 2 sisters. My older brother is an aircraft applied scientist, and younger brother is studying to become an electrical engineer. One of my sisters operates a daycare center and the other is in the military. My parents are still in Atlanta. My mom is an elementary school teacher and my dad operates boarding homes for troubled youth. My dad was a structural engineer for 15 years before he decided to operate a boarding home and give back to the community. He saw that the black community was in peril, so he had to do something. He opened boarding homes throughout the Atlanta area that assist men ages16 to 40. He helps these men beat addictions, provide them with employment assistance, education on how to run their own businesses, and ultimately skills on how to become productive members of society. The center is called: "The ties that bind" Giving back to the community is vital to making a community full of productive people."


In the future would you like to be a mentor to a student?


"I love teaching and giving back because I have received so much. In dealing with people younger than you... you learn from them just as much as they learn from you, so it's a 2-way street."