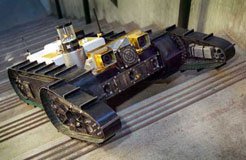 The JPL Urbie robot climbing stairs. Urbie is a modified iRobot Packbot, with JPL software for vision and navigation.

JPL has been recognized for its contributions of improved vision and navigation software to PackBot technology. PackBot is a commercial robot made by iRobot. The Space Foundation has recognized these contributions, by inducting the combined technology into its Space Technology Hall of Fame. From the press release for this award:

The iRobot PackBot is a tactical mobile robot used in urban terrain operations. Technology originally developed for Martian rovers was incorporated into the PackBot, including lightweight, high-torque actuators used for control, a strong but lightweight frame structure, and a riveted sheet-metal chassis. Currently, more than 300 PackBot robots are in use in Afghanistan and Iraq to clear caves and bunkers, search buildings, safely disrupt Improvised Explosive Devices and landmines, and even relay video, audio, and sensor readings. The Defense Advanced Research Projects Agency (DARPA), iRobot Corporation, and NASA's Jet Propulsion Laboratory will be recognized as the innovating organizations of the PackBot technology.

The full press release may be found here.