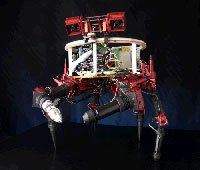 (Reprinted from The JPL Lecture Series website. A related article may be found as a JPL Technology feature story)

Planetary Robotics: to Mars and Beyond

The robotics engineers at JPL are currently developing new robotics technologies to provide scientists and astronauts access to new kinds of planetary terrain. This talk will present the current state of the art in planetary robotics and discuss where we are going in the future. We'll present videos and demos from the Mars Exploration Rovers, as well as our current research, including traditional rovers, autonomous walking robots for orbital operations, and large-scale transport vehicles that can be autonomous or piloted.

Both lectures begin at 7 p.m. PDT and run for approximately an hour. Admission is free. Seating is limited. For more information, call (818) 354-0112.


The von Karman Lecture Series, presented by JPL's Office of Communications and Education, brings the excitement of the space program's missions, instruments and technologies to the local community and webcast viewers nationwide. A different lecture is held each month in two locations: JPL and Pasadena City College (PCC). Thursday lectures are held at JPL's von Karman Auditorium and are available in a live and later archived webcast. Friday lectures are held at PCC's Vosloh Forum. All lectures begin at 7 p.m.

The Theodore von Karman Lecture Series is named in honor of JPL's founder. Von Karman's pioneering efforts in rocket development and propulsion research, and the subsequent emergence of JPL, helped pave the way for the future of aeronautics and astronautics.